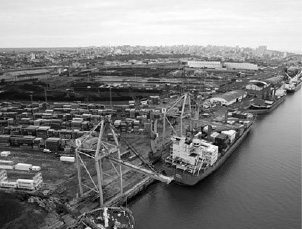 The consortium Thai Moçambique Logistica (TML), which plans to build a deep water mineral port at Macuse n Zambezia province, and a railway linking Macuse to the coal mining areas of Tete province, is working for financial closure of the project at the end of the first quarter of 2018.

Cited in Thursday’s issue of the Maputo daily “Noticias”, the consortium administrator, Mamed Latif, said that currently about 2.1 billion US dollars have been mobilized. The total cost of the project is now put at over three billion dollars.

Speaking to reporters at the 53rd edition of the Maputo International Trade Fair (FACIM), Latif said that immediately the financial engineering is complete, construction work will begin so that the new port and railway will be operational in 2022.

The contractor has already been chosen – it is a consortium between the Portuguese company Mota Engil and the Chinese Civil Engineering Construction Corporation (CCECC).

Coal is the main cargo expected to use the railway and the port. Initially the railway was planned to run from Macuse to the Moatize coal basin, a distance of about 480 kilometres. But recently it has been agreed to extend the line a further 120 kilometres, to Chitima, in Cahora Bassa district, where other coal mining companies are operating.

The railway will be the longest brand new railway built since Mozambique won its independence in 1975. At 900 kilometres, the line from Moatize to Nacala-a-Velha, on the northern coast, is longer, but parts of that line run along the existing northern railway.

As for Macuse port, Latif said that, in the initial phase, it will be able to receive ships of up to 80,000 tonnes. But later he expected it to take vessels of up to 120,000 tonnes.

Although the main cargo to use the new line will be coal, Latif said it would also carry other goods, notably agricultural products. Passenger trains will also run along the line.

The majority shareholder in TML is the Italian Thai Development Company of Thailand, with 60 per cent. Its partners are Mozambique’s publicly owned port and rail company, CFM, with 20 per cent, while the private Zambezia Development Corridor (CODIZA) holds the remaining 20 per cent.

The line to Macuse will be the third railway linking the coal producing areas of Tete to the Indian Ocean. Since the route is considerably shorter than the lines to either Nacala or Beira, the new railway could prove highly competitive.